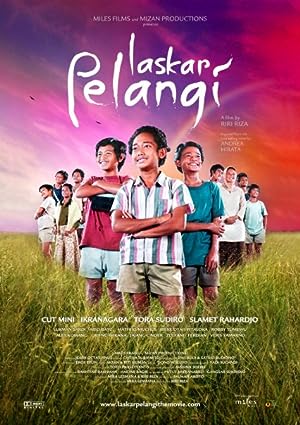 Laskar Pelangi, a film adapted from the best-selling novel by Andrea Hirata that has been long-awaited, has finally been released. Laskar Pelangi is directed by our top filmmaker Riri Riza and her permanent producer, Mira Lesmana. The success of the novel is predicted to have a positive impact on the screening of the film, and it turns out to be true. On the first day of release, the audience was booming extraordinarily. In Jogja, for example, it was not until midday that all tickets for that day were sold out. The author feels “lucky” to not read the novel and expects a big surprise from this film.

The story of the film set in Belitung Island in the late 70s. The island, which is rich in oil resources, does not guarantee that all its citizens live well. The story centres on the struggle of the teachers and ten students of Muhammadiyah Belitung Elementary School to be able to carry out teaching and learning activities in limited circumstances. Both the teacher, Mrs Muslimah and her students (Laskar Pelangi), Ikal, Mahar, Lintang, and others experienced joy and sorrow in the struggle to achieve their dreams and hopes.

Although the core of the Laskar Pelangi story is simple, it touches on many universal values, such as friendship, devotion, and sacrifice. Not to mention, social issues such as poverty and injustice to religious values. Quite complex indeed and each one has a relatively similar emphasis on the story. But it seems this also causes the depth of the story to be relatively shallow. Each of subplot, run individually, not clear where to go. Since the beginning of the film, the issue of poverty and injustice was thick but not so firmly integrated into the plot.

Mrs Muslimah repeatedly tested her dedication, especially after her senior died. Ikal is busy with her love interest, Aling, the Chinese girl. While Mahar, the quirky boy is always active with his radio and Lintang is even more troubled with a crocodile (the issue of courage) than the economic problems of his family. The sense of friendship also seemed less intense because the characters of the other students were less highlighted. Mr Harfan’s will, “giving more than receiving”, seems to affect the plot later (I think Lintang will become a teacher) but not. It’s only about hopes and dreams, after all.

The most remarkable achievement came from these young players, especially Zulfani (Ikal) and Veris Yamarno (Mahar). They were able to play very naturally in any scene. Zulfani played very well as a figure of Ikal who was innocent and was intoxicated by romance. While Veris appears to be able to steal attention every time through the expressive Mahar figure. Cut Mini also played pretty well as Mrs Muslimah with a very fluent Malay accent even though she still looked too pretty for this character while Ikranegara as the charismatic Mr Harfan is the single most prominent supporting character than a series of big names such as Tora Sudiro, Slamet Rahardjo, Mathias Muchus, Alex Komang, Jajang C. Noer, and Rieke Dyah Pitaloka.

Beautiful images with a strong composition again became the mainstay of the filmmaker like his previous films. The stunning and exotic local landscape (Belitung Island) strongly supports this. This achievement is indeed fitting with the theme of dreams and hopes. Still, it is too elegant (beautiful) if it must be coupled with the issue of poverty and injustice. One thing that is quite disturbing is the frequent cutting of the “pace” (tempo) of the plot of the film through the fade-out technique and followed by the use of transition shots containing landscape images. These two techniques are often used at the same time to close a scene in one segment of the same story.

This is indeed legitimate, but it feels strange (unusual). For example, when Mrs Muslim cried outside of school shortly after learning that Mr Harfan had died, the fade-out technique was used, and a beautiful view shot followed in the evening. We suspect that the next shot must be the next day but not. Moving scenes are still on the same day (night) shows the atmosphere of mourning in the house of Mr Harfan. Why the heck don’t use the usual cut. Why the technique is not used to end the scene of grief at Mr Harfan’s house, it feels more fitting. Filmmakers also do the same in many other scenes.

The use of some surreal scenes even though not one “tone” with other scenes is enough to give its colour, such as when Ikal blossoms to know the face of his idol and when Mahar chants Indian-style films to entertain a broken-hearted Ikal. Music illustrations, in general, are also very useful in supporting several scenes, especially in the dramatic moments. The song “Laskar Pelangi” which plays sweetly in the final segment of the film, is guaranteed to be a hit among young people.

Apart from some of its weaknesses, Laskar Pelangi can be said it is an exceptional achievement for our cinema industry. Shades of educational films (both for children, adolescents and adults) like this is what we should produce more often. It is also not difficult, and it feels like this movie is repeating commercial success, maybe even exceeding Ayat-Ayat Cinta.

This film also deserves to be our representative in the Academy Awards (Best Foreign Language)next year, even though in quality it is still difficult to compete. When watching the film, we immediately remembered two Asian movies that were similar to Laskar Pelangi, Not One Less (1999 / Zhang Yimou) and Twenty-Four Eyes (1952 / Keisuke Kinoshita). The difference is, these two exclusive films are very focused on the theme of the film, Not One Less is strongly tied to the issue of poverty, while Twenty-Four Eyes with the values of sacrifice and devotion.

Audiences around the world will have to wait an additional year to see Tom Cruise ride a motorcycle off a cliff in Mission: Impossible 7. Paramount has pushed back the release of the next two installments of the Mission: Impossible franchise by a year. The seventh entry in the series,… Read More

This week's return of the Long Range report looks four weeks out with an eye on major releases through Presidents' Day weekend. Based on early January trends and projections for the next month, it should be around that time frame when domestic box office approaches the $500 million threshold for… Read More