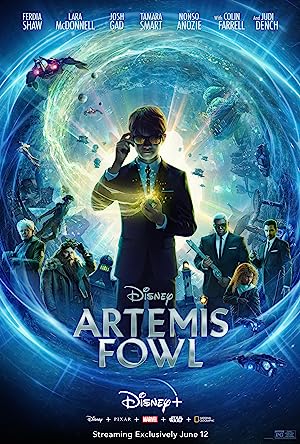 Artemis Fowl is a popular fantasy adventure novel series written by Eoin Colfer which was first released in 2001. Disney who adapted this novel to the medium of film, certainly hopes this series is the next Harry Potter. With a capital of USD 125 million and filmmaker Kenneth Branagh (Thor, Murder on the Orient Express), this film does have astounding visual effects and settings. But with the combination of a series of senior and young stars, such as Josh Gad, Colin Farrel, Judy Dench, Ferdia Shaw and Lara McDonnel, apparently not enough to lift this film.

An eccentric billionaire, Artemis Fowl Sr. (Farrel) is accused of stealing valuable antiques that are believed to prove the existence of another world. One missing object, Oculos, apparently caused a commotion not only in the human world but also in the world of fairies living in the earth’s core. This situation is exacerbated by the millionaire who was kidnapped by an evil fairy whose ambition is to rule two worlds. The son, Artemis Fowl Jr. (Shaw) along with two loyal assistants, trying to uncover this mystery through the instructions given by the father. While the fairies also sent their young agent, Holly Short, to look for Okulos.

Hmm… a little confused too to explain the story because I who was not familiar with the novel was also confused. Most of the time, I just murmured what the heck is going on? The plot of the story carelessly told quickly, indeed resulted in the lay audience unable to digest a variety of information so much story. Amid the confusion, the audience was also not given enough time to get acquainted more closely with the main characters. Not to mention, the achievement of its setting is so extraordinary, able to divert our attention, more than the story.

The Harry Potter series is an ideal example of how the audience is slowly being able to be brought into the world of magic through the figure of Harry. The genius of Artemis is not an innocent figure of Harry whom we can easily empathize. This genius figure, with his cold expression, doesn’t seem to need our empathy because he always works by himself as if he doesn’t care about the audience. The audience needs a “normal” figure who can explain everything. I do not know how the plot of the novel, which is not possible; everything goes so fast without sufficient explanation. This is outside the habits of the filmmaker who has a strong theatre background where the characterization of stories is of the utmost importance.

Beyond the achievement of the mise_en_scene element (notably the setting) as well as the extraordinary visual effects, Artemis Fowl, with a fast plot tempo, was unable to build a coherent story and sufficient empathy for his characters to those who have not read his novels. The audience is just confused amid the glittering settings and stunning visual effects. That’s right, we finally know everything that happened, but we already don’t care. However, critical and dangerous the story situation is, it is difficult to arouse our emotions. Why does it have to be Branagh? Films with a dominance of action and visual effects of this kind are not the realm of the filmmaker. Thor was not like this; dialogue and drama are still more dominant than the action. We’ll see, will this series continue? My guess is not.

On March 13, the Salt Lake Film Society closed its