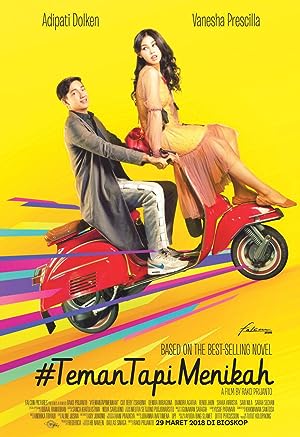 An opinion that loving a true friend is a beautiful thing can happen. In the past, I only assumed that such stories only existed in films. After watching Teman tapi Menikah (TTM), I came to believe that this was a dream as well as a reality. How come? The film’s story is based on a novel of the same name written by Ayudia Bing Slamet and her husband Muhammad Pradana Budiarto or commonly called Ditto. Then what is the power of this film compared to other romance films? The story is true! Yes, this is a charming love story and no wonder the novel bears the title of best-seller.

TTM tells the love journey of two friends who took 12 years to become a lover. Since childhood, Ditto (Duke of Dolken) idolized Ayu (Vanesa Prescilla) and was always amazed at her acting on the screen. Luckily, when Ditto Middle School had the opportunity to sit down with her, his idol girl. They are very close friends. However, Ayu always considers Ditto as a best friend. Until finally, Ditto also needs to struggle hard to save his feelings. It is not the ending that is the aim of the film’s story, because the title is obvious in giving a picture of the story. Although this story is lovely, for this kind of romantic film story, I’m sure the audience has often watched a sort of film production of any country.

TTM takes the viewer from one scene to another. Laugh, sing, cry sadly until touched. Scene by scene is presented very well, neat, and worth enjoying. The film looks worked with established and calculating. This immediately appeared in a fantastic opening scene, creating a perfect mood where the audience was refreshing to enjoy the shot after shot that was presented following the accompaniment of percussion music. Music and songs have a strong influence on this film. From the beginning to the end, accompany the love story that makes things delightful. The settings, costumes and makeup are enough to be considered in detail so that they look flawless.

One other thing, this film is so enjoyable to be followed until the end, is because of the cast. Adipati Dolken’s face was so expressive without having to move excessively in his previous film, Posesif. This time I was again amazed by his acting skills. He can act naturally even when no dialogue comes out of his mouth. The expression of a boy who is broken-hearted, rancid, and pretends, he plays it well. He can speak with his eyes. I’m sure more and more young girls are admiring him. Although I am no longer a teenager, I admit he deserves a thumbs up. Best Indonesian actor, Reza Rahardian, will probably diminish his prestige in a short time.

How about Vanesha? In contrast to the character Milea in Dilan (1990) who has reached more than 6 million viewers, Vanesha is now a cheerful girl who is more cheerful and attractive. Honestly, his way of speaking and voice are the main force to present his distinctiveness as a young actress. His voice was hoarse, and his way of speaking was spoiled and funny, which could liven up the atmosphere. The chemistry of these two lovebirds is so apparent that their interactions are so flexible and natural. In fact, outside the set, they were indeed later dating.

This film by Rako Prijanto proves that Indonesian movies have the potential to be proud of. Today’s romantic teen films are not inferior to Korean films where the scenes are more touching. I hope that similar movies with better quality continue to be produced so that millennials do not hesitate to love Indonesian cinema and continue to appreciate the work of the nation’s children.

Sharp NEC Display Solutions has announced the availability of the NC2443ML RB Laser Projector as part of its digital cinema projection series. According to a… Read More