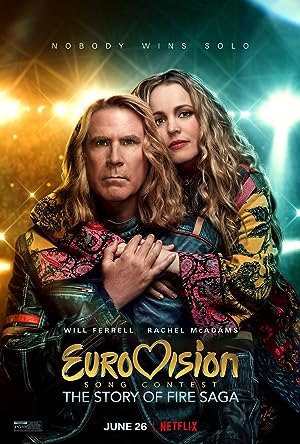 Eurovision Song Contest: The Story of Fire Saga (2020)
123 min|Comedy, Music|26 Jun 2020
6.5Rating: 6.5 / 10 from 61,994 usersMetascore: 50
When aspiring musicians Lars and Sigrit are given the opportunity to represent their country at the world's biggest song competition, they finally have a chance to prove that any dream worth having is a dream worth fighting for.
Director: David Dobkin
Creator: Will Ferrell, Andrew Steele
Actors: Will Ferrell, Rachel McAdams, Dan Stevens, Mikael Persbrandt

Films about song contests are rarely produced. This time, Eurovision Song Contest: The Story of Fire Saga takes the setting of a Eurovision song contest, which is very popular in Europe, like American Idol in the US. Unmitigated, the film released by Netflix featured several top stars. You name it Will Ferrel, Rachel McAdams, Pierce Brosnan, Stevens, Demi Lovato, and several well-known singers former Eurovision contestants in previous years.

Once upon a time, Lars (Ferrel) and Sigrit (McAdams) lived in a small town in Iceland and had a passion for singing since they were small with the music group, Fire Saga. Lars has ambitions to become the winner of Eurovision, the biggest song contest in Europe. Lars’s hopes came true when randomly selected, and they became one of the contestants in the singing event in their country. Luck is in their hands until finally, they can represent Iceland in the Eurovision event.

Even though the story’s setting is not in the US, Will Ferrel’s humorous style is still not much different from his previous films. McAdams, who used to play in serious dramas, looked a bit shocked in the film, in contrast to Ferrel. Especially with local accents that they never play. Like most romantic comedies, the story itself is not hard to anticipate, with Ferrel’s ridiculous comedy inserts that are often overdone. Without Ferrel, this film might work better. Speaking by vocals, Will Ferrel does sing using his vocal, but McAdams, reportedly mixed with the voice of Swedish singer, Molly Sanden. Of course. What else can you expect from such good vocal sounds?

Light and entertaining, nothing more, Eurovision Song Contest: The Story of Fire Saga attracts attention through its musical segments and comedies with its top stars who appear only as a display. The expected atmosphere of competition is not as biting as we hoped. For readers who like the combination of music and comedy, this film can be a distraction. The High Note, which was released recently, remains the main choice if you like this genre.