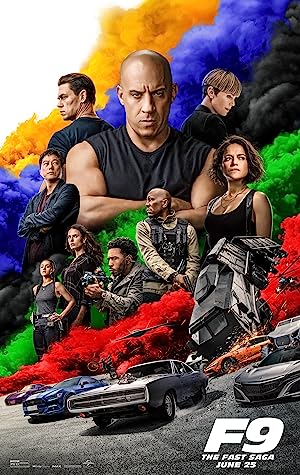 Still remember well this film was supposed to be released in April last year. Honestly, at that time, there was no desire to watch the film; why? This film is already too absurd for me. The action can no longer be enjoyed, let alone the story. The pandemic has changed the mindset of many people. Also, including movie lovers, maybe me too. Perhaps they are thirsty for entertainment so that whatever is there is considered a thirst quencher after a long time of not watching is deemed to be good. Strange, many bad films (in my opinion) are overvalued, for example, WW84, Justice League’s Snyder Cut, and Kong. F9? It felt like the worst.

My colleague once joked about the future of this series; maybe tomorrow Toretto cs will tie their car with a rocket and fly into space. OMG! I didn’t think this would happen. The silliness of the action is getting more and more from series to series, at least since series 6. Series 5 is still the best in the series, which is the basis for the plot formula for the next series until now—speaking of action, until now the race between Dom and Brian in the first series, even though it was only on a straight track for me is still the most memorable, especially for the sound system.

What’s the problem with F9? Countless absurd acts. There will be no dead figures in this series. The funny thing is, in this film, Roman tries to have a philosophy of fun with their fate, which is not just lucky, but there is something bigger than this until after all this time, Roman has never been scratched. It’s probably the only thing I like the most about the plot. They make fun of themselves. Talk about family? I feel so tired I hear it from series to series. The core plot of F9 is family. The antagonists are Dom and Mia’s, siblings. Why haven’t we heard of it before? Yes, it is possible. Just dying isn’t a problem. Maybe tomorrow; Dom has a super evil cousin who doesn’t know where he is now.

Fans of the series may still be crazy about this kind of absurd action, but not anymore for me. Everyone also knows, whatever the story is no longer a problem because the big names of the series have become guarantees to reap hundreds of millions of dollars. The sequel will continue to be produced somehow until when. At least, I hope that a solid action and story is reasonable and not pushy for the story and genre. The family message that became the jargon of this series became the weakness of the plot, which was easy to anticipate. Let’s see, where is this series going? Spin-offs, such as Hobbs & Shaw, or it could be that the series is very easy to produce. At least this could be another option to overcome the saturation of the series.

Over the final weekend of July, the box office picture grew somewhat more precarious given increasing concerns around the coronavirus Delta variant, which has led to a new indoor masking recommendation from the CDC and the imposition of masking mandates and recommendations in several cities and states across the U.S.… Read More

Rolando Rodriguez was announced this week as 2021’s winner of the Dan Fellman Show “E” award, a lifetime achievement prize, at November’s upcoming film convention ShowEast. Rodriguez is the chair, president and CEO of Marcus Theatres and executive vice president of The Marcus Corporation, in addition to his roles as… Read More