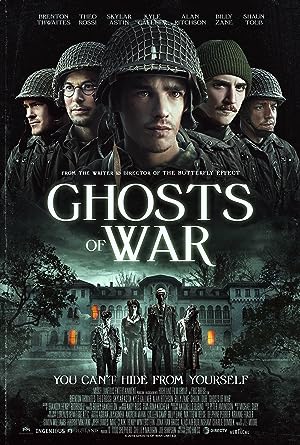 War settings are indeed very rarely developed by filmmakers, in addition to the genre of biography, action, and some of the popular superhero films lately. Overlord (2018) tries something new by combining it with horror and science fiction. Ghosts of War is now trying to explore freshly, but unfortunately, a little too much.

Ghosts of War is an Eric Bress-directed horror war movie that we know through Butterfly Effect and writes the Final Destination series. The film stars several young actors we know in television series, such as Brenton Thwaites, Theo Rossi, Kyle Garner, Alan Ritchson, and Skylar Astin. Although not a big studio produced, the achievement of the technical side of the film is fairly decent, especially the setting.

During World War II, five US soldiers were on a mission to inhabit a large house in a small town in France, which was once occupied by the Nazis. It is said that the occupants of the house were killed sadistically by the German army. Strange events ensued shortly after they spent the night there. The invisible entity slowly began to disturb the five soldiers who tested their sanity.

Baca Juga  The Girl in the Spider’s Web

Very interesting. The premise is promising a fresh story because it is usually a family in the position of these soldiers. The soldiers who are trained and fully armed certainly make the situation completely different. The setting of a large mansion, both exterior, and interior, is equally good at supporting the horror atmosphere. Expectations began to strengthen throughout the story that was creating curiosity. Jump scares are the mainstay throughout the film. Even though it’s no longer new, the atmosphere of a different story makes everything feel fresh. Not until the end of the second act, changed 180 ° of the story. Is the twist surprising? Not really, we’ve seen this before (mentioning the title = spoilers), and this destroys the story that was built neatly from the start. What’s the point in trying to do that kind of experiment? Not even saving the world.

With a combination of genre and fresh premise, Ghosts of War has everything to become something more, but excessive innovation destroys the story. The combination of story and genre can still be explored far better than this. What a waste. Hopefully, there are still filmmakers who want to glance in this direction in the future.