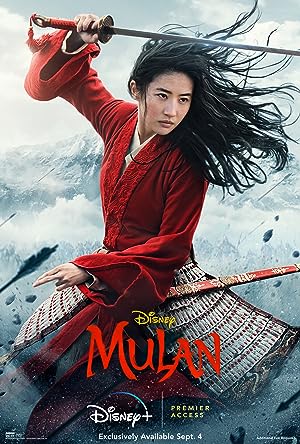 Since early February this year, it was not felt until September, and film-goers could no longer go to the cinema due to the ongoing pandemic. The film industry is one of the hardest hit. The online platform is the best-selling means of watching, and it impacts big films that should be showing in theaters. As if they could not hold back, Disney finally released Mulan, which was supposed to air last March, through its online platform, Disney +.

Mulan was directed by Niki Caro, who we know with his masterpiece film, The Whale Rider (2002). With a US $ 200 million budget, this film stars legendary Chinese stars, such as Donnie Yen, Gong Li, to Jet Li, and is supported by top young actresses Liu Yifei, Jason Scott Lee, and Tzi Ma. Like Jungle Book, Beauty and the Beast, The Lion King, to Alladin, Mulan (2020) was adapted from the best-selling animated film, Mulan (1998). Will this film be as popular as other animated remake films? It feels impossible in a situation like this.

The story is more or less the same as the animated film with only a few additions and subtractions here and a transition from the live-action version demands. Is it better? Far from the original. Like The Lion King and Alladin, this film loses the magical feel of the original story. The little dragon Mushu, the cricket, and the horse can balance the serious drama story in the animated movie. Minus the humor side, the live-action version is now like an action drama film that cannot inspire.

The story, too, in some scenes feels like jumping and incomplete. Whether because of unconsciously experiencing comparisons with the original story, it is clear that this film loses its “chi” and soul. For example, the scene where the father had to receive a military summons and walk without a cane to take the emperor’s orders. The dramatic side that was expected did not appear, and this happened a lot in other scenes. The climax action scene feels lonely and not magnificent.

However, it must be admitted that the cinematography side and the production value do show a very large film budget. Then how is the fighting action? If you are an admirer of Jet Li or Donnie Yen, don’t expect the fast, dynamic, and “real” fighting action in their films. The slow-motion technique is mostly used, and sometimes the young players are still too stiff. For me, this isn’t very reassuring because what I hope is that this film has advantages in terms of action choreography. Although, a single horse-chase scene through the action of his arrows was able to show off admirably.

Like The Lion King and Alladin, Mulan lost the magical power of the animated film by only offering captivating settings and cinematography. For a budget of this size, Mulan is very disappointing. I also hope that this film uses the original language. Although this film is arguably a new milestone because it is a mega-budget Hollywood film starring entirely Asian players for the first time. Of course, this is a matter of pride for us. Let’s wait, will the Little Mermaid’s achievements be any better than this?

Batman: The Long Halloween Part One

RealD has promoted both Karina Neill and Bobbie Andrews to the newly-created position of Vice President for the EMEAR region, the company announced today. Neill will assume the role of VP for Sales & Operations, while Andrews will be VP for Marketing & Commercial. Neill joined RealD in 2009 with… Read More

PRESS RELEASE San Tan Valley, Ariz., June 22, 2021 – Severtson Screens (severtsonscreens.com), a global leader in innovative and quality projection screens for the cinema, commercial, pro AV, and home theater markets, is proud to announce that it will exhibit its most popular options for its acclaimed folded SēVision 3D… Read More