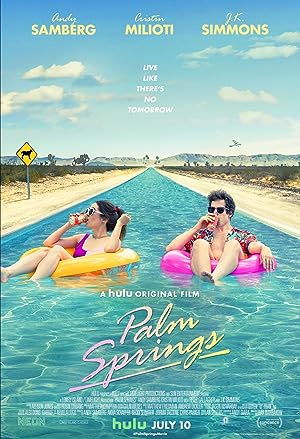 Palm Springs (2020)
90 min|Comedy, Fantasy, Mystery, Romance|10 Jul 2020
7.4Rating: 7.4 / 10 from 44,180 usersMetascore: 83
When carefree Nyles and reluctant maid of honor Sarah have a chance encounter at a Palm Springs wedding, things get complicated as they are unable to escape the venue, themselves, or each other.
Director: Max Barbakow
Creator: Andy Siara (screenplay)
Actors: Andy Samberg, Cristin Milioti, J.K. Simmons, Peter Gallagher

As we know it, the time loop plot has been explored dozens of times by filmmakers since The Groundhog Day, and this film is undoubtedly one of the best. Palm Springs is a fantasy drama directed by the film debutant Max Barbakow. After the premiere at the Sundance Film Festival earlier this year, the film was finally released streaming on July 10. The film with a budget of USD 5 million is starring Andy Samberg, Christin Milioti, and senior actor J.K Simmons.

Niles also attended the wedding of his girlfriend’s best friend. In one moment, Niles boldly made a speech to the bride and groom that attracted the bride’s older sister, Sarah. They both went to the desert to make love before someone came and wanted to kill Niles. Niles ran to avoid entering a cave, and Sarah followed suit. An anomaly occurred, Niles and Sarah woke up the same day at the wedding day the previous day. They are both trapped in a time circle, also with someone who is trying to kill Roy.

After a long time of exploration, the time loop formula finally came with an intelligent and brilliant script. What distinguishes it from previous films? One thing is the very sweet romance, with light dialogs inserted about the meaning and existence of life. It is a surprising story that can not be anticipated by anyone. Another one is the use of the loop plot formula itself, which is fresh, with multi-characters in it. In contrast to similar films, the two characters in this film, have looped for a long time, since the plot began. This is a new thing for this formula. Watching Palm Springs is a cinematic journey that is very exciting, especially if you follow the development of this formula from the beginning. (Time Loop at a glance – watch this video)

In addition to the formula, one strength of the film is its two main stars, Samberg and Milioti. They both have one of the best chemistry I have ever watched in the history of the development of its genre. The romance side wrapped in mystical elements due to the fantasy formula makes the relationship between them feel special. This is felt when they dialogue, look at each other, and their gesture. They can fill each other in all moments, and during that time, we are also able to feel something is up in their relationship. For time loop formulas, their chemistry is the best.

Palm Springs is a refreshing exploration of the time loop formula plus the chemistry of the two main stars. The filmmaker debutant, Max Barbakow has produced a special work. Two to three characters trapped in a time loop are already there before, say Korean film, A Day, and Russian Dolls series, but Palms Springs can explore and integrate all its elements even further. If you are a fan of the time loop format, Palm Springs is what you’ve been waiting for!