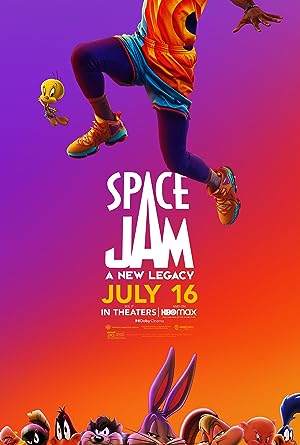 Space Jam: A New Legacy is the sequel to Space Jam (1996), starring the legendary basketball player Michael Jordan. The film is a combination of live-action, 2D, and 3D animation directed by Malcolm D. Lee. This USD 150 million budget film stars today’s big basketball players, Le Bron James, Don Cheadle, and all the big characters of Looney Tunes. Like most major Warner Bros. films. (WB), which was released this year, A New Legacy was also released simultaneously in theaters and on the HBO MAX platform. After 25 years of the first series, what does this film have to offer?

Al-G Rhythm (Cheadle), or abbreviated as Al, is artificial intelligence (AI) owned by WB in their studio basement. The studio offered famous basketball player Le Bron James to be the mascot of this sophisticated product, but he flatly refused. Al was angry and pulled Le Bron and Dom, his son, into the digital world. James himself is at odds with his son because Dom doesn’t want to follow in the footsteps of his career as a basketball player, but instead a video game. Al, who saw the son’s interest, made a competition between the son and father to play in a basketball game that Dom made. While James had to find teammates to play with, it was none other than the Looney Tunes team.

From the side of the story, it doesn’t seem like much is offered because it is a repetition of the original 25 years ago. The conflict is a little forced, and the worst part is that the story is very easy to anticipate. The story is not the main point, but the Looney Tunes steals the attention. I’m not sure if the Looney Tunes cartoon figure is still popular for the millennial generation. However, I enjoy their behavior as a source of nostalgia for childhood spectacles. To attract today’s audiences, filmmakers use almost all major characters and films belonging to Studio WB, from the classic era to the present, such as Casablanca, King Kong, DC’s great superhero, Iron Giant, The Matrix, Mad Max, The Game of Thrones, The Conjuring series, and even WB actor, Michael B. Jordan. Well, it’s kind of like Ready Player One, only this movie doesn’t use them other than just a quick patch.

Although not much is offered in terms of story, Space Jam: A New Legacy is an entertaining film full of nostalgia sensation from Bugs Bunny and his friends and tributes from all the iconic characters of the Warner Bros. studio. The only thing that excites the spirit of watching this film is the Looney Tunes. The basketball star is considered not a good film actor, even though he has tried his best. One thing that feels ridiculous is the sponsorship promo that has never been supposed to be this extreme. James’s cartoon figure falls to the ground by making a hole in the shape of the Nike logo. It’s okay, but it’s too much.

After multiple delays and six years of anticipation for Daniel Craig's final turn as 007, No Time to Die is finally set to hit theaters on October 8. The post Long Range Box Office Forecast: No Time to Die appeared first on Boxoffice. Read More

After two banner weekends at the box office, Shang-Chi and the Legend of the Ten Rings is looking to easily three-peat atop the domestic market. The post Weekend Box Office Forecast: Shang-Chi Targets Third #1 Weekend as Copshop and Cry Macho Eye Soft Starts appeared first on Boxoffice. Read More